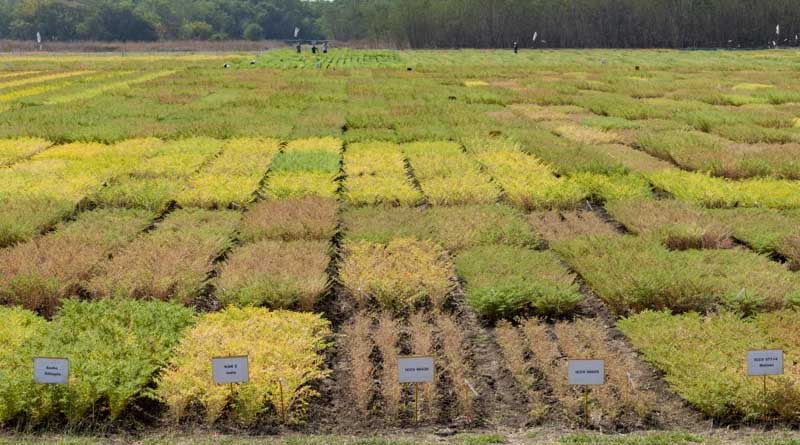 September 29, 2022, New Delhi: Meet the three female scientists who worked side-by-side with ICRISAT to create the most promising climate-smart chickpea varieties of 2022, which offer a superior alternative to existing varieties, especially in central and southern India.

A myriad of Indian culinary delights have chickpea as their main ingredient. While women and men are busy preparing these protein-rich dishes, there are also those behind the scenes who are constantly altering the grain to suit changing palates, seasons and climate.

The year 2022 has seen leading female chickpea breeders create varieties that can tolerate climate variability in terms of heat tolerance, mature early (one variety matures in just 94 days) and can be harvested at the machine for faster harvesting to escape unseasonal rains.

These varieties are also resistant to many diseases, including the dreaded Fusarium wilt. They can be grown in both rainfed and irrigated conditions and, most importantly, exhibit desirable market characteristics.

Dr Veera Jayalakshmi‘s association with ICRISAT dates back to 2005 when it began developing a drought-tolerant variety of chickpea in 2012 and the first machine-harvestable variety in 2015. Years of experimentation led to the release of the superior good desi chickpea (ICCV 14108) in 2022, which is resistant to Fusarium wilt. Dr. Jayalakshmi is a Senior Researcher at Regional Agricultural Research Station (RARS), Nandyal, Acharya NG Ranga Agricultural University (ANGRAU), Andhra Pradesh.

Dr Anita Babbar has developed a chickpea variety suitable for cultivation in Madhya Pradesh. The new release desi (ICCV15118) is tolerant to heat stress (late planting conditions) and superior to existing varieties in terms of yield and resistance to many diseases.

The large seeds have good drying quality and are a superior alternative to the existing five varieties. Dr Anita Babbar is a Senior Scientist at Jawaharlal Nehru Krishi Vishwa Vidyalaya (JNKVV), Jabalpur State Agricultural University, and has been associated with ICRISAT for over 20 years.

“The friendly yet professional atmosphere at ICRISAT and its inclusive way of working encouraged innovative thinking among women,” said Dr. Anita Babbar.

Dr Ritu Saxena has developed a chickpea variety that matures in just 94 days. This particular trait allows its cultivation in different cropping systems in the post-rainy period (Rabi) season in the four states of Andhra Pradesh, Telangana, Tamil Nadu and Karnataka.

The variety (ICCV 15101) has an average protein content of 22% and exhibits market-preferred characteristics. Dr Ritu Saxena is a Principal Investigator at Indira Gandhi Krishi Vishwavidyalaya (IGKV), Raipur in Chattisgarh and has been associated with ICRISAT since 2018.

Senior Chickpea Breeder at ICRISAT Dr. Srinivasan Samineni applauded the achievements and noted the role of ICRISAT in the development of new varieties.

“The above varieties are the result of product profiles developed by the chickpea crop team at ICRISAT and the respective state agricultural universities,” says Dr. Srinivasan Samineni, Senior Chickpea Breeder at the ‘ICRISAT.

In India, researchers select from the provided breeding material and promising lines are nominated for the All India Coordinated Chickpea Research Project (AICRP) for dissemination. Over the past 10 years, 23 varieties have been released in India through collaboration between the Indian Council of Agricultural Research (ICAR) and ICRISAT.

Comparison of the three new varieties

(For the latest agriculture news and updates, follow Krishak Jagat on Google News)