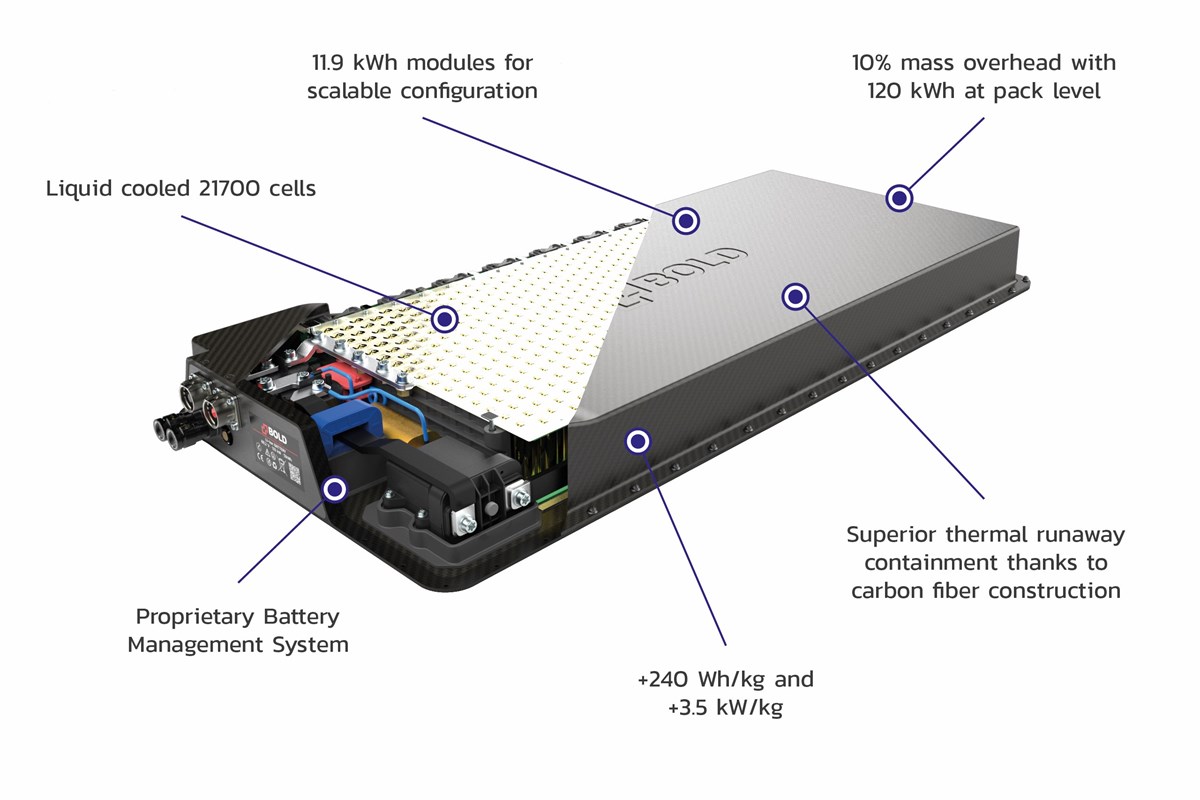 The most significant threat to a battery is thermal runaway. Thus, optimizing the thermal performance of battery boxes to not only prevent thermal runaway from occurring, but also to mitigate its spread throughout the battery, is essential.

Thermal runaway occurs when a fault – such as overload or overheating, among others – causes a cell to generate temperature at a rate greater than what can be dissipated. This increase in temperature triggers exothermic chemical reactions inside the cell, which release heat and, in turn, fuel other exothermic reactions. This leads to a chain reaction that spreads to neighboring cells, often resulting in a fire and complete destruction of the battery, as well as potential destruction of the vehicle, depending on its severity.

The specific design, shape, and size of electric vehicle (EV) battery boxes vary widely depending on the cell types used, cooling requirements, module distribution, and application, such as vehicle type and the environment in which it will potentially be used. work. However, in general, module enclosures consist of: (1) an enclosure base (2) an enclosure housing (3) a connector plate that connects the indoor and outdoor components, and (4) vent valves for allow pressure equalization or gas release during thermal runaway.

Materials used for battery boxes should have high thermal performance, good mechanical properties and also be lightweight. Traditionally, aluminum and steel have been the materials of choice due to their high heat resistance and suitability for mass production. However, the heavier weight of metals is a significant disadvantage, especially for hybrids and electric vehicles, where lower vehicle mass means higher energy density and extended vehicle range. Currently, the mass of the battery can represent up to 50% of the weight of the vehicle.

Composites, on the other hand, offer a lightweight alternative and have the potential to outperform metals in many ways, but are often overlooked due to their reputation for high complexity and cost. For example, Bold Valuable Technology (Barcelona, ​​Spain) recently helped develop a carbon fiber reinforced polymer (CFRP) case for a motorsport customer. The original case was made of aluminum and weighed 6.7 kilograms (14.8 pounds). The CFRP alternative was 91% lighter, weighing just 616 grams (1.35 pounds).

To achieve the high thermal and mechanical performance required from a battery case, thermoset carbon fiber prepregs are mainly used. Carbon fibers provide strength and rigidity to the case and are pre-impregnated with high quality resin systems such as epoxy. However, the manual layering process typically used with these prepregs, along with the long cure times and historical need for an autoclave, have limited prepreg battery cases to low production volumes.

Although typical engineering thermoplastic resins used in automotive applications (e.g. polyamide/nylon, polypropylene) offer fast molding times and are therefore easier to mass produce, their limited behavior at higher temperatures makes them unsuitable for battery boxes. In addition, to achieve the required mechanical performance, the wall thicknesses must be increased, which increases the weight.

Therefore, Bold is currently exploring new material concepts that can achieve the high performance of thermoset prepregs as well as the manufacturability of thermoplastics. One such material option is polycarbonate-based thermoplastics with fiberglass reinforcement that can be used in standard injection molding processes.

Another advantage of composites is the ability to optimize fiber direction to meet the specific loading requirements of each drum enclosure. Finite Element Analysis (FEA) is widely used in the design process to determine the direction of the fibers and the amount of plies needed to achieve enclosures with high stiffness and strength while remaining lightweight.

However, the isotropic properties of metals still provide some advantages to battery boxes and are often used around bolting points. Where one part of the enclosure is attached to another, metal inserts usually aluminum or titanium may be incorporated into the laminate to provide additional strength and rigidity at those specific locations.

When developing battery boxes, electrical isolation is another consideration. Carbon fiber is conductive, so layers of fiberglass are embedded in the laminate to electrically isolate specific electronic components. 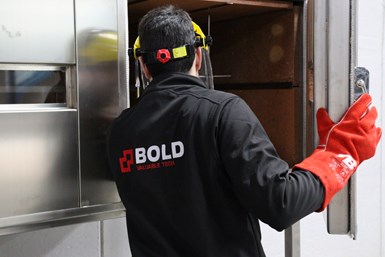 One of the tests in the UL94 flammability standard subjects the material to a flame for specific times.

To determine the number of layers needed, Bold tested the dielectric strength of a variety of fiberglass samples. Other materials used are Kevlar, Zylon and Dyneema, which are much lighter but are only used in conventional applications because they have a glass transition temperature (Tg) lower than that of fiberglass. Each sample used a different type of resin matrix and had a different number of layers. The samples were placed between copper plates and a voltage was applied. The amount of electrical current (measured in amps) that the material allowed to flow was then used to determine the resistance of the material. These tests showed that the type of resin – not the number of plies – determined the dielectric strength. Therefore, only a few layers of fiberglass are needed inside the carbon fiber laminate to effectively electrically insulate the enclosure.

To ensure the thermal performance of batteries and battery cases, a variety of tests and safety standards must be passed before a battery can be certified for use. The first standard is UN38.8, which certifies the safety of lithium batteries during transport. It involves eight tests, including altitude simulation, thermal tests, vibration tests, shock tests, external short circuit, impact and crushing, overcharge and forced discharge. The batteries must also be certified according to the ECE R100 REV2 standard, which specifies the necessary tests that must be carried out on lithium batteries installed in four-wheeled electric vehicles for the transport of people or goods. In the case of aviation, other standards like DO311A and DO160G must be considered.

As for the battery case, the composite materials must meet the UL94 flammability safety standard. This involves multiple surface burning tests, both vertical and horizontal, where a controlled flame is applied to the material multiple times for specific periods of time. The amount of time the material continues to burn after the flame is removed and the amount of evidence of burns or flaming drips determine whether the material achieves a UL94 V0, V1, or V2 rating. The more self-extinguishing the flame, the stronger the material and the better the rating, with V0 as the highest rating, extinguishing in less than 10 seconds with no flaming drips.

To ensure that its battery cases meet these standards, Bold conducts its own comprehensive testing programs, which include mechanical, dielectric, flammability and thermal runaway testing. It is expensive to use a fully fabricated battery case for these tests, so sample materials are often used instead. To test the effect of thermal runaway, individual cells are positioned in a cartridge and thermal runaway is induced. The volume of gas emitted by the cell is measured and the resulting pressure that the enclosure must withstand can then be calculated.

Each time a test is carried out, this data is fed back into the simulation software and the results are correlated. This improves the accuracy of the materials’ predicted mechanical and thermal performance, giving engineers confidence when optimizing the number, type and thickness of plies for the composite battery enclosure.

Maximizing the thermal performance of a battery enclosure is a contradictory challenge. On the one hand, the materials that conduct heat should be used, so the heat from inside the battery can be dissipated, reducing the temperature and mitigating the risk of thermal runaway in the first place. However, once thermal runaway has started, the battery case should be made of thermally resistant materials to isolate the event and prevent its propagation within the battery pack.

Normally, the heat extracted from the cells is directed to a cold plate to ensure proper thermal management throughout the battery. However, the use of thermal interface materials near the cells to help extract heat from the cells and direct it to the enclosure rather than to neighboring cells helps to balance this heat conduction dichotomy while ensuring thermal resistance. A temperature insulating material is placed between the cells to prevent heat from spreading from cell to cell.

Isaac is a Battery Systems Design Engineer at Bold Valuable Technology (Barcelona, ​​Spain). Born in Barcelona, ​​Isaac developed a passion for sustainable mobility and clean energy as part of his university’s Formula Student electric racing team. Since then, he has developed a wealth of experience around engineering and technologies that enable sustainable mobility. Isaac is now working on developing high-performance batteries for hybrid and electric aviation that leverage composite materials to meet structural and safety requirements.