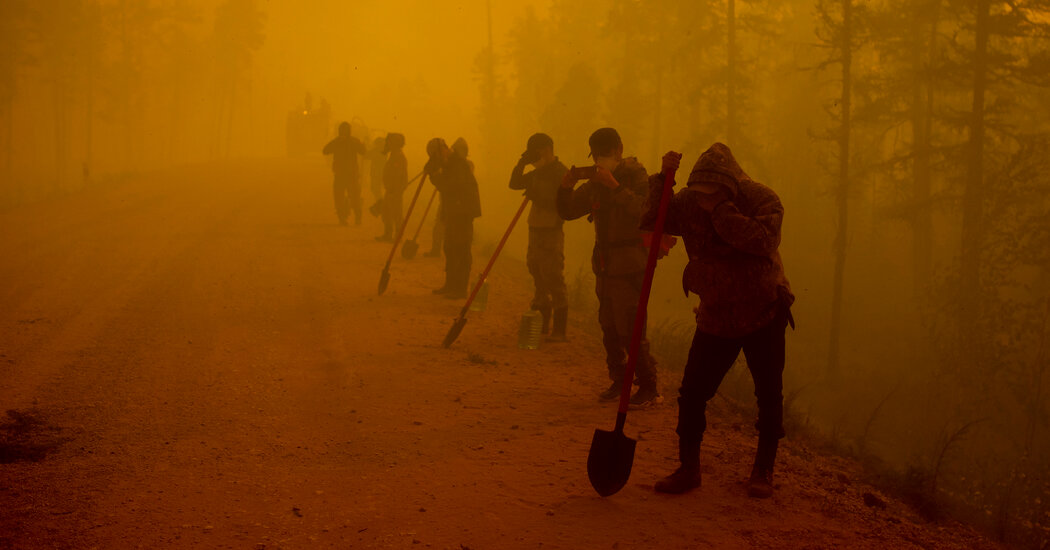 Reviews | Did we miss Biden’s most important remark on Russia?

Nearly every crucial line from President Biden’s recent marathon press conference has been dissected so far — except one, which may prove to be the most prescient. You had to listen carefully because it went by quickly. It was when Biden told President Vladimir Putin that Russia had something far more important to worry about than whether Ukraine was looking east or west, which was “a scorching tundra that won’t freeze more naturally.”

My translation: Yo, Vladimir, while you were busy putting on your “little green men” in Ukraine – all those masked Russian soldiers in green uniforms with no insignia – little green shoots sprang up in your warming tundra. Siberia experienced a totally bizarre and hyper-extreme weather event – a forest fire that firefighters had to put out with their boots because the local water sources were all frozen.

I’m pretty sure this was the first time an American president had tried to persuade a Russian leader to get out of his neighbor’s front yard and instead focus on safeguarding his own backyard – because as Siberia is affected by climate change, this will threaten Russia’s stability much more than whatever this is happening in Ukraine.

Alas, Putin is part of a generation of world leaders who only know how to build their popularity on the strength of their resistance to enemies abroad and at home. But we are now at the start of a transition, I predict, where more and more leaders will try – or have to build – their stature by generating resilience for their people and their neighbors in a warming and suffering world. water stress.

This excerpt from a November Moscow Times article explains why — and what Biden was referring to. It’s dystopian:

“An unusually rare wildfire has engulfed Russia’s tundra as the country faces significant changes from climate change, Interfax reported.” Some 900 acres “are burning despite sub-zero temperatures in the Magadan region some 10,000 kilometers east of Moscow. “The tundra is usually covered in snow this time of year, so such fires occur extremely rarely,” Interfax quoted an unnamed source as saying. Firefighters’ efforts to douse the flames are hampered by frozen water tanks, Interfax reported. A video posted online shows firefighters working to put out the fire with their feet and tree branches.

I have no illusions that Putin noticed Biden suggesting that Russia is much more vulnerable to climate change expansion than NATO expansion – or would be deterred if he did. He doesn’t strike me as a guy that’s very interested in the weather. But the climate is interested in him.

Putin can choose to ignore this. His successor will not have this option.

“About 65% of Russian territory is covered with permafrost,” explained the Moscow Times in another report. “As air temperatures have risen over the past few decades, this ground that has been frozen for millennia has begun to thaw.” If this melting accelerates, it “is expected to cause significant damage to human settlements and key energy and transportation infrastructure. And as permafrost thaws, it releases long-stored greenhouse gases like methane, setting off an accelerated warming feedback loop.

Of course, one day some of this tundra could become rich agricultural land. But until then, watch out: “As Earth’s climate zones shift from the equator to the poles, once-forested lands are turning into deserts,” the Moscow Times added. The republic of Dagestan, about 930 miles south of Moscow, is close to Russia’s agricultural heartland, “and experts fear that desertification could spread to these regions and affect the country’s food supply.”

These same climate- and drought-related pressures are already prompting some of the new generation of Middle Eastern leaders to subtly shift the basis of their authority from resistance to resilience.

Opinion talk
The climate and the world are changing. What challenges will the future bring and how should we respond to them?

Consider another big story that also didn’t get the attention it deserved – the energy-water deal that Israel, Jordan and the United Arab Emirates tried to finalize in November..

The essence of the deal was this: the United Arab Emirates – whose leader, Mohammed bin Zayed, is the most prominent Arab leader working to boost its stature by ensuring resilience – would finance the construction by an Emirati company of a huge solar power plant in Jordan that would generate cheap electricity for Israel, which would build a desalination plant on the Mediterranean and send water to an increasingly parched Jordan.

Well, a funny thing happened on the way to signing, Axios first reported. Saudi Arabia came out of nowhere in the 11th hour and tried to pressure the UAE into canceling the deal. It wasn’t because the Saudis were opposed to the concept. Completely the opposite. This is apparently because the Saudi Crown Prince, Mohammed bin Salman, the most powerful neighbor of the United Arab Emirates, wanted to himself be seen as the region’s dominant player in green energy deals, not the UAE and Jordan – so he might be seen more as a figure of resilience than a figure of resistance. As a result, the deal was sweetened to a memorandum of understanding.

MBS, as the crown prince is known, has tried to diversify and green the Saudi economy, away from its dependence on petrochemicals. But that has been overshadowed by Saudi Arabia’s continued involvement in Yemen’s bloody tribal civil war – where resistance-oriented leadership is still the only game in town.

Still, just as Biden’s press conference was likely the first time a US president tried to dissuade a Russian leader by invoking Mother Nature over missiles, it may have been the first Arab-Arab diplomatic spat. on which the leader would be considered to generate more resilience. than climate resistance.

But it’s better. Now, this struggle between resistance leaders and resilience leaders is also moving within countries.

EcoPeace Middle East is an alliance of Israeli, Palestinian and Jordanian environmentalists pushing for a regional strategy called the Green Blue Deal. It would build on the Jordan-Israel-UAE deal, but also include the Palestinian West Bank and Gaza and extend to both fresh water and electricity. Two EcoPeace leaders, Gidon Bromberg of Israel and Nada Majdalani of the Palestinian Authority, were invited last week to present their ideas to the UN Security Council.

Unfortunately, the Palestinian representative to the UN showed little interest in their proposal in his own remarks to the Security Council. And Israel’s UN ambassador Gilad Erdan – a right-wing holdover from the days of former Prime Minister Benjamin Netanyahu – has used his time to score points with the right at home, blaming the Palestinian Authority not to respond to Israeli overtures for collaboration on the environment.

This prompted Israel’s current environmental protection minister, Tamar Zandberg, to publicly rebuke Erdan for spreading information “inconsistent with the truth and in a style that does not represent the minister’s position”.

Zandberg said that she and her Palestinian counterpart have already started joint projects in the fields of “environment and waste” and that their “work is progressing well in a different atmosphere than before…on the basis that climate change knows no borders and that both peoples will benefit from this collaboration.

The compound annual growth rate (CAGR) of the Metal Heat Exchangers market will increase in the coming year? – The Oxford Spokesperson