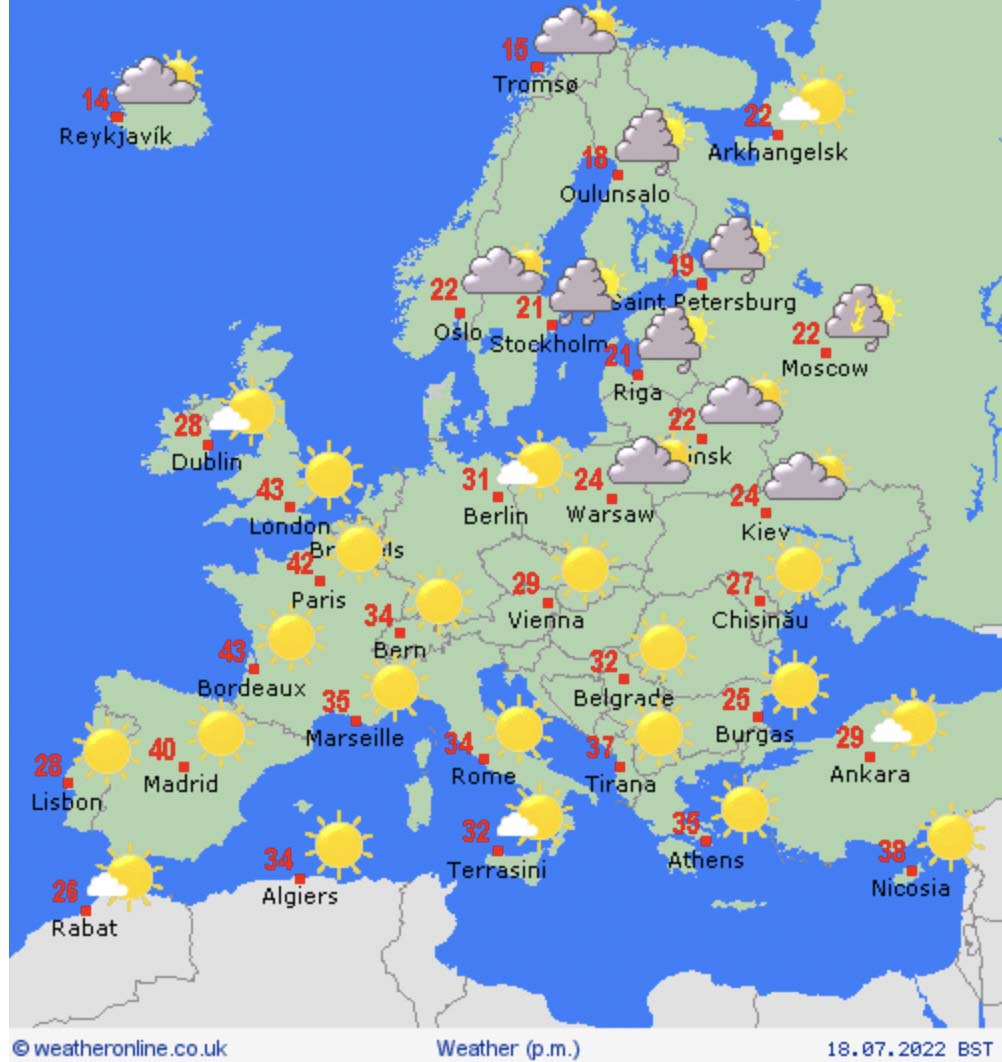 As Western Europe enters its second heat wave in the past 30 days, maximum temperatures are expected to set records. UK residents could experience conditions none of them have ever seen as temperatures soar to 104 degrees F (40C) or more, prompting authorities to issue the first ever red warning of “extreme heat” for Monday and Tuesday.

Further south in Europe, in southwestern France, there were temperature spikes of nearly 108F (42C) on Saturday, as the city of Biarritz broke a record high temperature. Almost three-quarters of the country’s population, or 45 million people, were affected by red or orange heat alerts during the first heat wave ever recorded in France.

Hot, dry weather has led to numerous wildfires in Britain, Spain, Portugal and France over the past few days, prompting an earlier than usual start to the fire season. Firefighters in London, yes London, have dealt with more than 800 wildfires since the start of last month until July 12.

Two fires near the coastal town of Arcachon in south-west Gironde have scorched more than 24,000 acres since Tuesday. About 3,000 firefighters assisted by firefighting planes are battling the blazes in southern France.

A pilot was killed while working on a fire in northeast Portugal on Friday when an Air Tractor AT-802AF Fire Boss came down near the town of Torre de Moncorvo after bailing water on the Douro River.

Spain is also working on several large fires that have burned tens of thousands of acres. In southern Andalusia, 3,000 people have been evacuated after a fire broke out near the village of Mijas in Malaga province. About 200 firefighters supported by 18 aircraft are assigned to the incident.

BBC weather forecaster Ben Rich explained that the current heatwave is caused by the jet stream moving north and part of it breaking up to form an area of ​​low pressure to the west. from Portugal, a low cutoff, with southerly winds pumping northerly heat into Western Europe, including Spain, France and the UK.

According to the European Commission’s Drought Observatory, much of western Europe and southern parts of the UK are experiencing drought ranging from warning level to alert level. Dry soils allow more surface heating and the result is record high temperatures and below average humidity in vegetation, creating conditions conducive to large wildfires with high resistance to control.

The video below is a summary of the current wildfires in Western Europe.

After working full time in wildfires for 33 years, he continues to learn and strives to be a student of fire. View all posts by Bill Gabbert