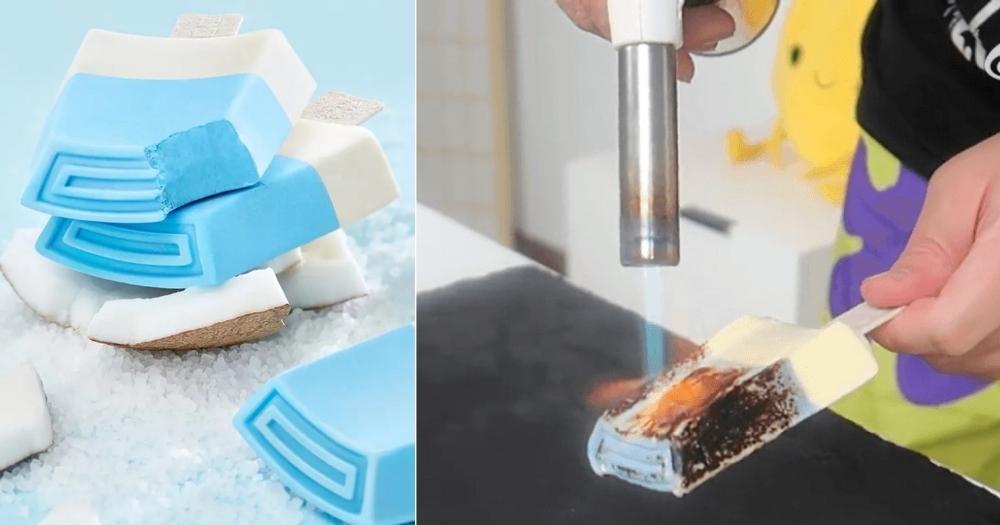 China’s ice cream does not melt, comes under fire from netizens and triggers investigations – Mothership.SG

Follow us on Telegram for the latest updates: https://t.me/mothershipsg

An ice cream brand in China, Zhong Xue Gao (钟薛高), or Chicecream, has come under fire after some consumers realized that one of its popsicles apparently didn’t melt even under intense heat. was applied.

Several photos and videos of Chicecream’s Coconut Sea Salt Ice Cream have been circulating on Chinese social media platform Weibo and the internet.

Perhaps the most compelling of the lot was a video that showed the popsicle withstanding the fiery heat of a blowtorch.

In the video, a man can be seen torching blue and cream coconut sea salt ice cream with a butane torch.

For those who don’t know, a blowtorch can reach a minimum temperature of at least 1200°C, while ice cream melts at sub-zero temperatures, depending on its composition.

An ice cream product must melt as soon as the temperature exceeds 0°C.

However, that wasn’t the case for Chicecream’s logic-defying, heat-defying popsicle, which simply turned brown and began charring in the video while under a harsh direct flame.

The man remarked towards the end of the video that it took a long time before the popsicle finally produced a singular droplet of liquid, which landed on the surface of the table.

By then, the ice had been burned to a point where the surface exposed to the flame had completely blackened.

There were more videos in the same vein that showed curious individuals putting the Chicecream popsicle under the direct flame of lighters and even stove tops.

Likewise, these popsicles oddly managed to withstand the extreme heat produced by the very hot flames.

There are also photos showing the remaining ice cream popsicle in pristine form despite being left outside at room temperature (31°C) for over 50 minutes.

Questions about “the Hermès of ice cream”

The popsicle’s apparent resistance to heat has caused many people to question Chicecream, the first of which was against the ice cream brand itself.

Known widely as “the Hermes of ice cream” in China, Chicecream prides itself on being a luxury ice cream brand equivalent to renowned Western brands, such as Magnum and Häagen-Dazs.

The brand’s founder explained the high price in a 2021 interview, saying that all of Chicecream’s products are made from 100% natural, unprocessed premium ingredients.

However, photos and videos of the sturdy, globby ice cream popsicle proved otherwise, and many began to wonder if it was loaded with additives instead.

The company responded to circulating photos and videos and released two statements on July 5 and July 6 separately.

The company explained that their products are able to retain their shape above 0°C because they contain very little water.

Apart from the water that is naturally present in the ingredients, the brand has stated that it does not add any additional water in its products.

Widely approved by food safety governing bodies, such as the United States Food and Drug Administration, carrageenan is used to preserve structure and is commonly found in mass-produced ice cream.

Chicecream claimed that its Sea Salt Coconut Ice Cream contains “an appropriate amount of carrageenan, where each 78g popsicle contains 0.032g of carrageenan.

The company also claimed that this amount complied with Chinese government regulations on food additives.

Congratulations on making it to the end of this article. According to our data, only one in seven readers makes it to the end. It makes you different. The kind that enjoys consuming such content. And possibly create your own. For us. The type of content to keep more of our readers loyal until the end. Want to write for us? Look at this.